About Us
|
Our Staff
|
Why Choose Us
|
Testimonials
|
Contact Us

The History of the Lewisburg-based funeral home is comparatively short, considering that it was established almost 70 years ago! The Grenoble family is only the third family to take ownership of the funeral home, preceded by just two previous owners.

The original owner (Glenn E. Dornsife) established and ran the funeral home for a total of 29 years, and the second owner (Gary H. Cronrath) operated it for nearly 40 years.

Mr. Dornsife, a graduate of Sunbury High School and the Renouard School of Mortuary Science in New York City, was engaged in the funeral profession in Sunbury for 14 years prior to establishing a funeral business in Lewisburg on October 1, 1938. On April 1, 1945, he purchased the former Matlack home (the current location of the funeral home) and began operating his funeral business from that site.

On October 14, 1967, he sold the business and real estate to Gary Cronrath. Mr. Cronrath was a graduate of Lebanon Valley College and the San Francisco College of Mortuary Science. He worked with his father, Paul E. Cronrath, at the elder Cronrath's funeral home in nearby Watsontown, and was associated with Knight Colonial Funeral Home in Williamsport. When word got out that Mr. Dornsife was looking for a buyer, Gary's father encouraged him to pursue the opportunity. Gary and his wife, Robina, successfully operated the funeral home while living and raising their family there. When it became evident that neither their son, Raleigh, nor their daughter, Louise, were interested in taking over, Gary began looking for other buyers.

In the fall of 2006, Nathan E. Grenoble, who also owned the Grenoble Funeral Home in Muncy, expressed interest in acquiring the funeral home (as well as the Watsontown location). On March 30, 2007, the deal was closed and the new name, Cronrath-Grenoble Funeral Home, went into effect. Ironically, a related line of the Grenoble family had already lived in the Lewisburg area for many years. Those Grenoble's operated some of Lewisburg's previous businesses, including a jewelry store and a butcher shop.

In 1937 on one side of his parent's double home on Brimmer Avenue, Paul Cronrath opened his funeral business. The following year he moved his business to its current location, 308 Main Street.

In 1983 he sold the business to his son, Gary. Although Paul retired at age 70, he assisted Gary in the business until just prior to his death in 1998. His dedication and involvement in the funeral industry spanned a period of over 60 years.

In the fall of 2006, Nathan E. Grenoble, who also owned Grenoble Funeral Home in Muncy, expressed interest in acquiring the funeral home (as well as the Lewisburg location). On March 30, 2007 the deal was closed and the new name, Cronrath-Grenoble Funeral Home, went into effect.

William H Wallis (born 2/23/1878; died 5/20/1949) began his own funeral service in 1902 in a storefront located at S. Main St. Muncy. At that time funeral preparations were an all-day affair. Supplies were transported by horse and buggy to the home, where the embalming process was performed. Those same supplies, consisting of black cases packed with hand pumps, hypodermic injection equipment, and jars to mix embalming fluids are stored in the basement today, as well as a portable embalming table and buckets used in the gravity- fed process. The funeral service was held either in a church or the deceased’s home. Crushed velvet burgundy and gold reversible curtains (also still stored in the basement) were used as a backdrop during the viewing and funeral.

In the late 1920’s, William moved his business to its present location at 121 S. Main St, Muncy. The third oldest house in Muncy, it was built in 1797 by Stephen Bell. In 1803 it was enlarged considerably when its new owner, General John Burrows, converted it into a tavern by adding a bar, upstairs ballroom, center hallway and expanded stairway. Cowdan Wallis (William’s father) purchased the building in 1835 and converted it back into a home.

In 1923 Williams’s son, Howard E (born 7/11/1909; died 7/13/1991) joined him in the business. Howard moved into the home when he was 10 years old before it was used as a funeral home. He remembered when his father decided to wire the house. It was nearly impossible, as the original builders had filled the exterior walls between the studs with sticks and mud as insulation, and installed a layer of bricks above the 1st floor ceiling (to keep rats from going one floor to the other). Howard took over the business in 1949 (when his father died) and retired in 1972. He sold the business to his son, David, who began working there in 1960. 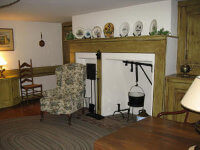 Eventually Howard and Louise moved to the house on the south side of the funeral home and David and Joan moved to the house on the north side. Then a new downstairs display room was added in the former garage at the rear of the building and David and his family moved into the entire 2nd floor. It was during that renovation that the contractors tore off the cupboards in the former prep room and discovered the original kitchen fireplace complete with crane, cauldron, andirons, and warming oven. The room was renovated back to a kitchen and now serves as a comfortable, relaxing room in which funeral arrangements are made. 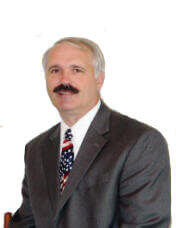 In 1989 David invited Nathan E. Grenoble to join him in the business. Grenoble, who was raised in Clinton County, was not a total stranger to Muncy. His grandfather, D. Edward Grenoble, had been Muncy’s Police Chief from 1949 to 1966.

Nathan purchased the business in 1993 and Dave retired in 1996. In 1994 Nathan did battle with the stick and mud insulation when adding computerization to the office. In 2002, the 100th year of the business, he enclosed the side porches allowing for a rear entrance from the parking lot and added a handicapped accessible ramp.

A year of daily grief support

Our support in your time of need does not end after the funeral services. Enter your email below to receive a grief support message from us each day for a year. You can unsubscribe at any time.

About Us
Our Staff
Why Choose Us
Testimonials
Contact Us